The Hondon Valley... Beautiful mountain views, the vineyards and 310+ Days of glorious Spanish sunshine per year! 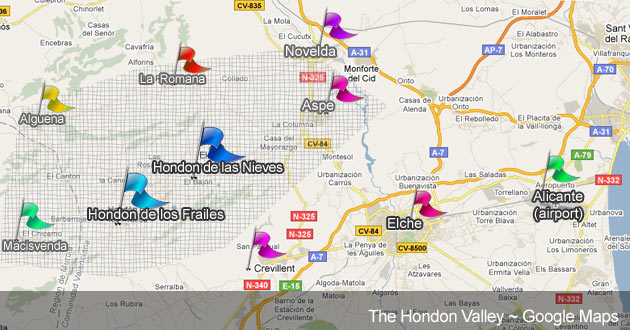 The Hondon Valley is still a relatively undiscovered secret, within easy access of Alicante and the Costas. The Hondon Valley mountain trails are popular with hikers and bikers. The nearest sandy beach (Santa Pola) is about 40 minutes away. If you fancy a city trip, then you are also four hours from Madrid and three hours from Granada and the stunning Alhambra Palace, both of which makes for easy weekend cultural breaks.

Hondón de las Nieves is a small village, inland, set in the Hondón Valley, west of the Alicante Region in Southern Spain. It’s nearest city is Elche to the south east or Crevillente (both about 20 mins drive). There is a close neighbouring village also called ‘Hondón De Los Frailes‘. Both villages are typically Spanish, rural villages: quaint, friendly and have changed very little over the years. The economy and work rely heavily on the agricultural industry in this very fertile valley and the building industry as there multiple quarries for limestone and marble mountains. The influx and property investment of northern Europeans has helped revive both villages.