So much to see and do for holidays or permanent living in the Alicante region! 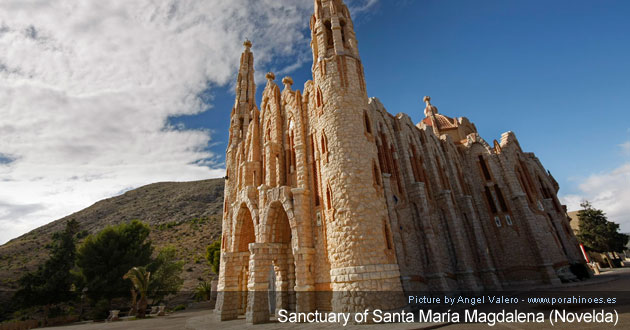 A unique treasure just waiting to be uncovered with Gaudí-inspired architecture, red marble and exotic, heady spices..no, this is not a Lebanese restaurant in the centre of Barcelona, but Novelda - just half-an-hour's drive from Alicante airport and sandwiched between three mountain ranges, it is the gateway to the coast from the dry, scorched... | » Read more about Novelda at Think Spain...

By: Jade Holden, Think Spain...
Guadalest is just north of Benidorm, Costa Blaca. With its turquoise reservoir and bell tower glinting in the sun, Guadalest is the most visited village in Spain But despite the hordes that visit Guadalest every year, it retains a unique ambience and is not to be missed! 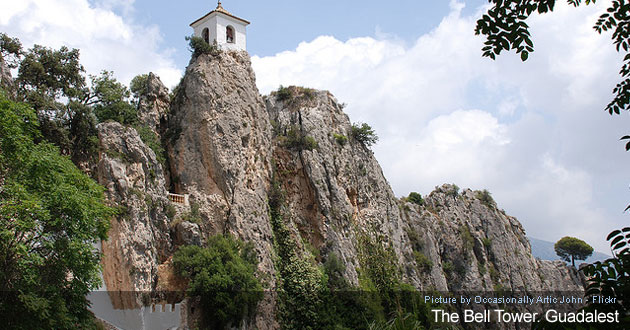 Visiting tiny Guadalest (population, only 250 inhabitants) the busy city scenes and stress quickly fade away and you are faced instead with mountain and sea views, orange and lemon trees and a sense of pure nature, interrupted only by the road you're driving on and the odd café. As you continue to wind your way through the mountains you will soon be able to make out Guadalest's iconic bell tower sitting politely on the top of the frequently photographed rock face... | » Read more about Guadalest at Think Spain...

A beautiful and historial city well worth a visit. A stroll through the city's streets reveals an interesting historical centre of its glorious past... (Elche, The City of Palms) 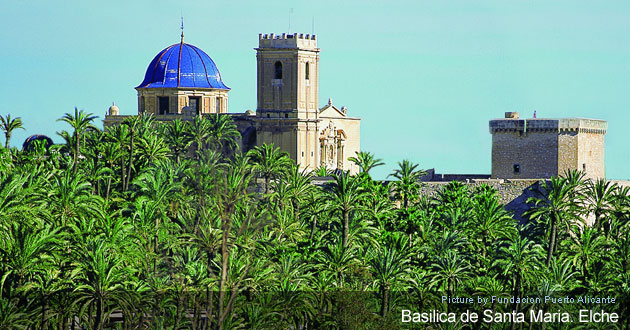 Famous for over 200,000 palm trees, the "The Palm Grove" is a legacy of the Andalusían farming culture, and is now a World Heritage Site. Also famous as the Footwear Capital of Spain there are 100's of shops and factory outlets, the designs are amazing!

But Elche offers so much more... Visitors Centre of Spanish Culture, Great Festivals, Historic Architecture, Restaurants Galore, Theatre and so much more. Elche (Elx) is just of the E15 Motorway close to Alicante Airport... | » Read more about Elche at Turisme d Elx...

Any visit to Alicante and you can't fail to notice this impressive castle situated on an outcrop over looking Alicante City. It's one of the largest medieval fortresses in Europe and covers the complete summit of the Benacantil Mountain. Originally built by the Moors in the 10th century, the castle received its name from the conquest of King Alfonse the Wise that took place on 4th December 1248: Saint Barbara's day. 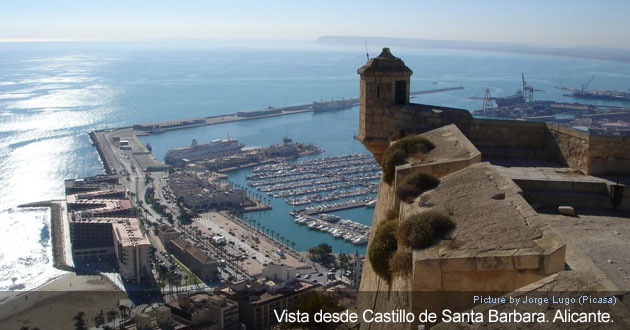 Over the following centuries it was developed and extended leaving it with three main areas all dating from different eras. Santa Barbara Castle has everything you would expect, cannons, a palace, dungeons, a moat, the ruins of a small church and of course that famous lookout tower. From all around the walls you get the most fantastic views: a definite photo opportunity. And when you're tired of walking up and down steep paths, peering over cliff edges and pondering the places from where boiling oil was thrown, there are two café areas where you can take a break in the shade of pine trees... | » Read more at Alicante Tourist Information

Find out more on these local Tourist Information websites...

Costa Blanca. From Wikipedia, the free encyclopedia.
Costa Blanca, Spain, literally means in English "White Coast") and refers to the over 200 kilometres of coastline belonging to the Province of Alicante in Spain. The name "Costa Blanca" was devised as a promotional name used by BEA when they launched their air service between London and Valencia in 1957. Visit WikiPedia Here.

It has a well-developed tourism industry and is a popular destination for British and German tourists. It extends from the towns of Dénia in the north, beyond which lies the Costa dels Tarongers, to Pilar de la Horadada in the south, beyond which lies the Costa Cálida. It includes the major tourist destinations of Benidorm, Alicante, Dénia and Xàbia.

History: In 711 AD the Moors invaded Spain through Gibraltar and would occupy the region of Alicante by 718 AD. Their occupation was to last nearly four hundred years and would mould the landscape of the region. The Moors introduced irrigation and the planting of oranges, peaches and almond orchards. The terraces seen on the hillsides throughout the region are an everlasting Moor legacy.

The Moors would not be completely expelled until 1492, when Ferdinand and Isabella, the Catholic monarchs, finally took control of Granada. In 1095 Spain became part of the North African Berber Empire and for another four hundred years the Moors and Christians would fight over control of Spanish soil.

Alicante was gradually regained from the Moors in 1248 by Jaime I of Aragon. After their expulsion, the Moors continued to attack Spain. Between 1500-c1650 Berber pirate attacks were frequent all along the Mediterranean coastline. The first Spanish constitution was written in 1812 and following this the provincial boundaries were established, establishing the regions including Alicante and Murcia as they are today. In 1923, Miguel Primo de Rivera took control of Spain as a dictator, eventually forcing Alfonso XIII into exile. The Spanish Civil War, (1936–1939) would divide the country. Alicante and Murcia would remain supporters of the Republican movement. In 1939 General Francisco Franco, the leader of the Nationalists took control of Spain. During the 1960s and 1970s tourism exploded throughout the region to nearly 4 million visitors a year.